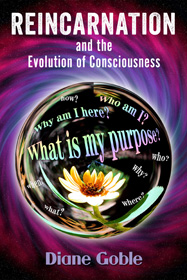 and the
Evolution of Consciousness

Diane Goble has been on a spiritual path since her near-death experience while drowning  in a white water river rafting accident in 1971.

In this book, she reveals the hidden mysteries about reincarnation and the evolution of consciousness that she recalled while traveling with a Being of Light through other dimensions of Reality.

One of her early thoughts during her NDE was… how could I have forgotten (while I was in my body) that I had done this many times before… left my physical body and returned to my spiritual home?

Diane wrote about her expeerience and what she learned on her web site for twenty years, and spent many more years in meditation and study within the greater mystery schools, and religious and secular schools of thought–combined with an interest in physics and cosmology. As a  hypnotherapist specializing in past-life regression therapy, she gained a greater understanding about how reincarnation leads humans to the awakening of higher consciousness and how we can actively partcipate in the process.

With this channeled book,  Diane was able to step-down incoming information and write about it impartially, in terms more people can relate to, without all the confusing jargon and mysterious names… so everyone can begin to participate in the evolution of their own consciousness towards Peace & Joy.

The Challenge of Being Fully Human

Add your name to my list and I will let you know when updates are available.