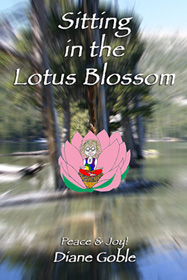 Sitting in the Lotus Blossom

Diane considers this a channeled book because she was in the process of writing what became Through the Tunnel in the early 1990s when this other information kept coming through that had nothing to do with conscious dying, Her writing sessions often involved leaving her body and writing in a meditative state.

Eventually she agreed to transcribe their book if they would then help her finish  Through the Tunnel… which they did and she self-published it. She made their download of information available to visitors to her original website BeyondtheVeil.net. When she took the website down, she put their information into this eBook.

They turned out to be a cast of corporeal and non-corporeal entities who somehow connected with her consciousness to pass along their messages for those who are open to hearing what they came to teach. Apparently she agreed to this collaboration when she was on the other side and they were holding her to it because they were relentless.

The drawings in the book are Diane’s. She just happened to be a cartoonist so that’s how they appeared to her. The entities found them amusing and encouraged her to leave them in the book.

Humor is a good quality!

Available at most online booksellers (search Diane Goble) including: